On the 1st December 2016 established National Agency for Network and Electronic Services a GOV CERT SK unit within its organisational structure.

GOV CERT SK is a specialized center primarly designed for improving cybersecurity of the GOVNET network. 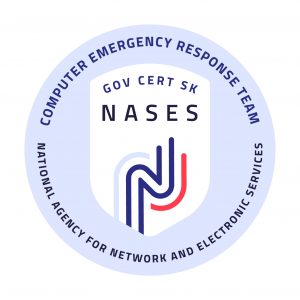 Even though at a first sight these appear to have different meanings, CERT (Computer emergency response team) and CSIRT (Computer Security Incident Response Team) – both units for computer incident solving – the content of their agenda is basically the same – computer security incident solving and providing services for recovering the activity of the system.

When did the first CERT/CSIRT appear?

The name Computer Emergency Response team – CERT was used for the first time in 1988 at Carnegie Mellon University because of a worm Morris and his spreading on the internet that was causing considerable damages. As a result the abbreviation CERT started to being used all over the world. As the name CERT was a registered trademark in the USA, the teams dealing with computer incidents started also using the name CSIRT – Computer Security Incident Response Team. Whereas the functioning of these two is identical, the usage of CERT/CSIRT is equivalent.

Later successes of CERT led to the creating of similar institutions in some government departments as well as some other countries. As it later turned out, it is useful for these institution to cooperate.